It might not have the sandy stretches of Benidorm, or the wilderness of Galicia, but the beaches in Javea are still the best in Spain. At least that’s what a poll of 60,000 beach lovers said. The secluded cove of Playa Granadella was picked as Spain’s top-loved beach for two years in a row on the nationwide Antena 3 channel.

But that’s not all that beaches have to offer in Javea. The rocky headland and wide bays are home to marine reserves, Roman treasures and a family-friendly sandy beach.

Here’s a look at 7 of the best beaches in Javea, according to what clients say to top car rental agency Blanca Cars https://www.blancacars.com/

Javea’s Playa Granadella is always winning awards. It’s been ranked as one of the top beaches in Spain in National Geographic, in Forbes and in El Pais. The cove also featured in The Cold Light of Day film, featuring Bruce Willis.  Granadella has also seen intense interest among buyers looking to purchase a property in Javea. The Carrer del Pic Tort road offers panoramic views over Granadella and is the most expensive house in the Valencian Community. Average house prices there are €3,080,409 according to  Idealista.

The Playa del Arenal is Javea’s most family friendly beach. It’s the central touristic area of Javea and swells in summer as visitors arrive from Valencia, Madrid and far further afield. The Arenal is a sandy beach with clear, shallow waters leading into the Mediterranean. The Arenal beach is also fringed by top bars, restaurants and shops on the Paseo del David Ferrer, which honours the former world no. 3 tennis player commonly spotted walking his dogs around the town. The Arenal is overlooked by a Parador hotel, one of the first in Spain set up to drive the tourism industry. Boat owners will also enjoy the Arenal for the marina located just off the main canal. The Marina Nou Fontana is busy in the summer as families and friends head off for an afternoon at one of Javea’s stunning coves. 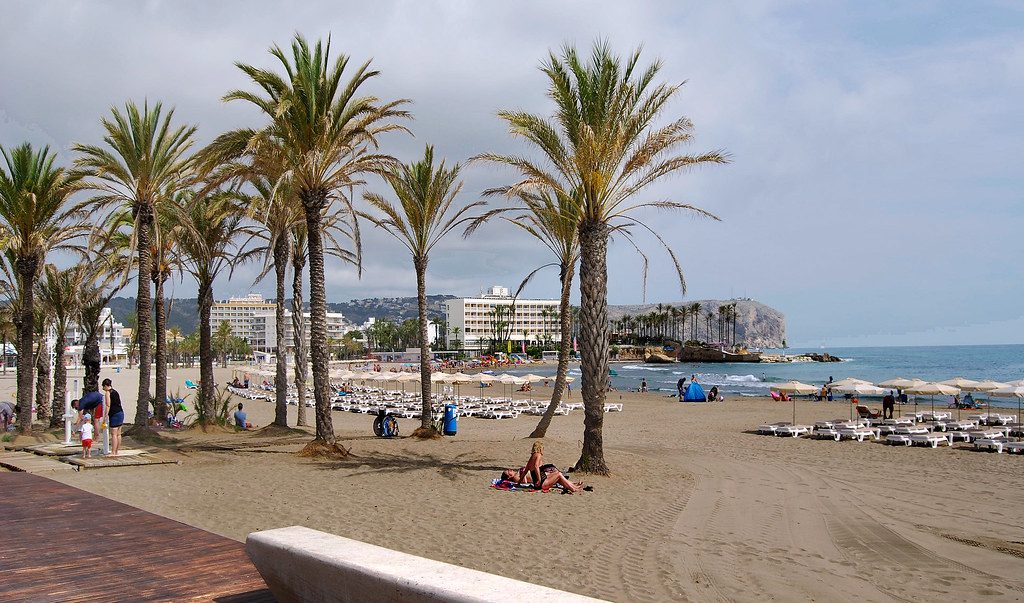 Javea’s Playa de la Grava is a pebble beach situated in the port area of town. It’s the third of Javea’s blue flag beaches, alongside Playa Granadella and the Arenal. Each of these beaches has a lifeguard during tourist season. The Playa de la Grava enjoys very sheltered and shallow waters, making it popular with residents of all ages. It’s not uncommon to see people bathing as early as April and as late as November on this beach. The proximity to a fresh fish market, restaurants and bars make this beach one of Javea’s most visited.

Between Javea’s Playa de la Grava and The Arenal exist the two Montañar beaches. While not as famous as a bathing area due to its rocky nature, the Montañar beachfront is well known for other reasons. Many of the nooks and crannies carved into the rocks date back to the Roman age. Archaeological studies found the region commonly known as the ‘Baths of the Queen’ are in fact ancient deposits for making Garum. This Roman delicacy was made by mixing fish guts and other foods with salt into a deposit until it fermented under the sun. The sauce was poured into an amfora and shipped across the Roman empire. A separate canal, called the sequoia de la Nora, is a Roman-era construction that allowed for the production of salt. Hence the name Saladar is commonly attached to regions behind the beachfront.

Cala Tango is a hard-to-reach cove on Javea’s Cabo de San Antonio headland. On foot, it’s a good 20 to 30-minute journey from Javea’s port area. But the walk is worth it. Cala Tango used to have a diving board about 17m high, but all that now remains is a platform you can jump off into the Mediterranean blue. A tiny cove is also hugely popular with boats taking a day trip.

Cala Tango is also popularly believed to be the site of a famous painting by Joaquin Sorolla in 1905, called Niños bañándose entre rocas. Javea. The painting depicts Sorolla’s three children. Sorolla was one-time called ‘the most famous painter in the world’ and called Javea his favourite place to paint.

The Cala Portitxol, and the next-door Cala Barraca, are two stunning beaches situated in a bay on the other side of Javea from the Cabo de San Antonio. It’s another region packed with luxury houses where the beaches start filling up from as early as 7 am in peak tourist season. The region boasts an island on the other side of the bay, the Isla de Portitxol, and the waters in between are a fertile marine reserve. Snorkellers won’t take long to find cuttlefish, octopus, moray eels, large bream and other aquatic life below the surface. But Portitxol has other secrets – in 2021 a diver found 53 gold coins dating 1,500 years back to the Roman era. Investigations at the University of Alicante dated the coins to the end of the 4th Century AD.

Javea’s two headlands are home to numerous coves. Many of them cannot be reached by road, and even more, can’t even be reached by foot. In certain areas, old ropes and steps made by fishermen are the only way to get down to sea level. Cala Ambolo is of these stunning pebble beaches at the foot of a steep cliff. It’s a designated nudist beach but has been closed for a year due to the dangers of falling rocks.

To visit these beaches in Javea at the lowest prices, visit Blanca Cars and get a quote today.

Discover some of our best listings

We use cookies to ensure that we give you the best experience on our website. If you continue to use this site we will assume that you are happy with it.Ok